A Novel of the Wild Southwest 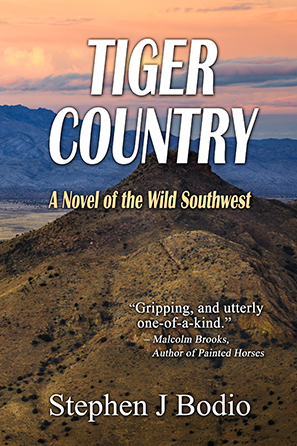 Rancher Juan Aragon has begun to revive the Pleistocene, and everyone must pay the bill.

In the high country of southern New Mexico, home of the oldest wilderness and the biggest roadless area in the lower 48, ghosts are stirring, waking shadows of things that haven’t been seen for a hundred years. Reports of iconic beasts and mysterious carcasses filter down from the mountains, while something the newspapers call “The Bosque Bigfoot” is killing cows down by the Rio Grande.

Soon the world’s attention will be fastened on the wildlands of New Mexico, as more than the fate of a single native species is at stake. In his first novel, acclaimed natural history and travel writer Stephen J Bodio, whose 1988 memoir Querencia depicted the landscape and ways of southern New Mexico, and gave many readers their first glimpse of this faraway country, imagines the rebirth of big predators like the grizzlies and jaguar, in his own back yard. All too often discussions of “re-wilding” are abstract, with little thought for their unfolding in the real world, as though the country were a park. In Tiger Country, the effects are real. As viewpoints and people collide, the media, ranchers, naturalists, activists, politicians, and ordinary people must take their stands in the real world, not just in theory. Respectful of all the actors, especially the non-human ones, and in debt to none, Bodio shows the heartbreak of unintended consequences.

At times suspenseful, lyrical, hair-raising, and even funny it is a worthy fiction debut, and Bodio is uniquely qualified to tell it. Biologist, falconer, dog breeder, literary critic, and hunter, born in Boston but a rural New Mexico resident for almost forty years, he knows the wildlife, people, and cultures of his chosen Querencia.

Malcolm Brooks, author of Painted Horses, says: “Steve Bodio brings his legendary Renaissance vision to this startling first novel, a work so mammoth in scope and elegant in execution it makes me wish he’d been writing fiction all along. Recalling the edgy best of Ed Abbey and Jim Harrison, and reminiscent of James Carlos Blake’s contemporary border noir, Tiger Country throws modern heroic renegades into the gravitational pull of the ancient past, to encounter the origins of the human condition.”

Amazon USA
Amazon Canada
Amazon UK
and other Amazon stores worldwide
Barnes & Noble
Independent Bookstores
Available at bookstores near you and worldwide at your favorite retailers.

Amazon USA
Amazon Canada
Amazon UK
and other Amazon stores worldwide
Barnes & Noble
Independent Bookstores
Available at bookstores near you and worldwide at your favorite retailers.